What Happens When a Contractor Fails to Meet the Obligation? 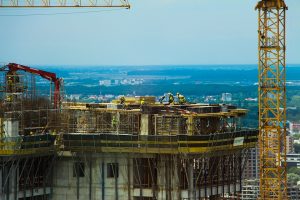 Here’s our latest Surety Bond Industry Round-up, which is a monthly series where we examine current events in the surety bond industry.  This month, we curated industry-related news that detail issues related to surety bonds in the construction industry – what happens in case contractors fail to fulfill their obligations stipulated in the contract for construction projects.

Specifically, we will be talking about 1) Defaulting on contracts; 2) Filing for bankruptcy; 3) Revocation of licenses, and 4) the three C’s of bonding which can help and prevent contractor failures.

A well-qualified applicant for a construction surety bond has established a sound financial statement and healthy cash reserves. Throughout the process, contractors work with a surety professional who helps explain the requirements and ensure they put their best foot forward in the bond application process. To be issued construction bonds is a success! Or so it seems. But what happens if the contractor failed to meet the terms specified in the contract?

Let’s say that the contractor didn’t meet a project owner’s expectations by defaulting on the contract? The Obligee – which is the project owner, government agency, or state department – has a say on it all.

For instance, in Morganton’s The New Herald, staff writer, Sharon Mcbrayer, writes about how North Carolina has dismissed the contractor for a new Broughton Hospital.

The State Department of Health and Human Services (DHHS) sent a letter to the Archer Western Contractors detailing that the contractor for the new hospital has failed on meeting the terms of the contract.

According to the letter, “...the contractor has failed to resolve or cure six of the seven grounds for an annulment the state laid out in its Feb. 22 notice to the company.

Therefore, as of the date hereof, DHHS at this moment declares AWC’s Contract annulled and terminated for default.”

The issue with the contractor was that it “hasn’t executed agreed to change orders in the December 2013 Memorandum of Understanding it entered to avoid an earlier default on the project. AWC also hasn’t provided proof of timely payments to subcontractors.”

Not meeting the contract terms, delaying payments, and avoiding MOUs dictated by the state could end up in an unprofitable project and stain a contractor’s reputation. This not only leads to loss of net worth, but it is also detrimental to bonding when an insolvent contract appears on the completed work schedule.

Here’s what contractors should never do: “AWC has used the same excuses, sought to resurrect stale contract claims, and demand acts by DHHS and others to which it has no claims.”

Another issue with contractors is when they file for bankruptcy in the duration of their construction project.

Alexander Zannes of KHON2 tells about a construction road project along Kuahea Street in Palolo situated in Honolulu, Hawaii.

The project was set in April to address residents’ road concerns, but it appears that they will have to wait because it was now on hold indefinitely. The reason? “The Company contracted to do the $4.7 million work is in the process of filing for bankruptcy.”

According to the news article, city officials put safeguards in place for contractors and construction companies, especially when these kinds of situations arise. “For all construction projects, the city requires companies to obtain a surety bond. The city is now working with the bond company, who will assume responsibility for the project.”

That said, sureties may require a written explanation documenting the financial loss before extending additional bonding support. The contractor could have difficulty paying subcontractors and suppliers when on the verge of bankruptcy. This could lead to complaints and even bond claims. Losing a project is always bad news, but it is more damaging when the loss was within the contractor’s grasp.

This is why surety bonds play a critical role in the construction process. Construction bonds are instruments to provide financial protection if a construction project is not performed as originally contemplated. If a contractor abandons a job, flees the state, or fails to complete their obligations, an appropriate bond would cover this up to the bonding amount.

So the contractors have already posted all the construction bond requirements and fulfilled the contract obligations. Their responsibility does not stop there, however.

In fact, contractors could have their licenses revoked in the event of a disaster.

In Booth’s story, “Collapsed Downtown Berkeley balcony results in contractor’s license revoked,” the California State Contractors License Board (CSLB) made a decision that revoked the license of Segue Construction Inc.

The construction company is “the general contractor responsible for building a Berkeley apartment complex where six people fell to their deaths, and seven were seriously injured after a balcony collapse in June 2015.”

“Segue’s responsible managing officer, or RMO, chief executive officer and president from 1992 to 2008, and David Dunlop, Segue officer from 2002 to 2008 and Wallis’s successor as RMO from 2008 to 2016, have both accepted “joint and several” responsibility for reimbursing CSLB’s total investigative costs.”

“If Wallis or Dunlop chooses to associate with a California contractor’s license after fulfilling the other requirements of the settlement — either Segue’s or another company — he would also be required to file a disciplinary bond with CSLB, totaling between $15,000 and $150,000. The amount would be officially determined at the time and frozen in place for at least two years.”

According to CSLB spokesperson Rick Lopes, “Already, all licensed contractors in California are required to carry a $15,000 surety bond. This disciplinary bond would be in addition to the required surety bond.”

The revoking of the license and the posting of a disciplinary bond would somehow ensure the State of California that similar events would not happen again in the future.

For contractors, a bond should be considered a valuable instrument because it serves as protection and peace of mind for all parties concerned. Fulfilling obligations is critical to not losing a construction project, whether small or large.

The NEED to have the three C’s

Kim Slowey, who writes “The Dotted Line: How to navigate ‘the 3 Cs’ of construction bonding,” a feature which is a part of Construction Dive’s “The Dotted Line” series, takes on the three Cs of bonding – a useful and informative piece that can help contractors avoid being fired, bankrupt, and license-revoked.

The Three Big C’s of bonding: Character, Capacity, and Capital.

Contractors can ask themselves these questions:

Attorney Mark Johnson, a Snell & Wilmer partner, tells Construction Dive, “While (the surety) guarantees run to the owner and suppliers and subs and lien holders on the job, their real business partner is the contractor that they provided the bonds for.

At the end of the day, if the contractor loses the dispute resolution and cannot make the financial restitution it needs to, then (the surety) will be there to respond.”

In effect, clients usually prefer to work with contractors who post bonds as a form of financial guarantee, and savvy subcontractors and suppliers may request to see proof of a contractor’s bond before agreeing to execute a subcontract.

Construction can get extremely costly, especially when things go wrong on a project, making a construction surety bond an essential tool to have in place.