Home » Blog » The One Thing That Can Make Your Business Great

Have you ever wondered why some businesses reach a level of greatness and why others don’t? Is it sheer, dumb luck? Right timing? Great leaders? A perfect product-market fit? A killer marketing team? A we-can-conquer-the-world capital?

We’re not going to ignore the fact that there are plenty of factors that come into play when it comes to making a business great. But as it turns out, there is one thing that will help your business reach that level, and it’s called the Hedgehog Concept.

What is the Hedgehog Concept?

According to Jim Collins, it is a “simple, crystalline concept that flows from deep understanding about the intersection of the following 3 circles.” 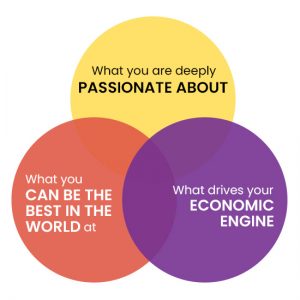 Jim Collins and his team came up with the concept while studying how companies transition from good to great. The concept is inspired by Isaiah Berlin’s essay which is about the Greek parable, The Hedgehog and the Fox.

The logical theory is that oddsmakers will pick the fox over the hedgehog. It’s faster, bigger, and cunning. The fox would also constantly devise schemes to attack the hedgehog.

The hedgehog doesn’t dwell on the fox’s attacks. He goes about his usual daily routine. Whenever the fox would sneak an attack, the hedgehog would curl into a tight ball with spines sticking out, making the fox retreat.

Based on that, Berlin divided people into 2 groups: hedgehogs and foxes.

Foxes, he said, are “scattered and diffused, moving on many levels.” The hedgehogs are the opposite. They simplify complex things and follow a single concept. Hedgehogs don’t give importance to anything that doesn’t belong to their concept.

In other words, hedgehogs only focus on what matters. The rest is just noise.

The great companies that Jim Collins and his team studied have a deep understanding of the three circles. They know what they can be the best in the world at (and stick to it), what they are truly passionate about, and how to produce a spectacular profit.

The Hedgehog Concept is not just a framed mission statement. It is their northern star—the ultimate guide to everything they do.

To do that, you first need to look at each circle.

It sounds so simple in theory; the execution, however…well, that’s a different story. It will take a thorough look into the inner workings of your business, lots of brainstorming, and of course, testing. But if the outcome is having a great business eventually, then all those will be worth it in the end.