It’s easy to get confused about the sections, wording, or clauses of a surety bond form, especially in the beginning.

But it’s important to have a good understanding of it because it contains significantly more features than a typical contract.

Surety bonds are legally binding contracts that police agreements about the conduct of the parties (the Principal, Obligee, and the Surety) involved.

Unfortunately, some people don’t bother to read them because they’re filled with confusing legal terms. Yes, they contain precise legalese, but those are necessary to avoid any uncertainty. Those words follow legal precedence.

Others even fail to check the specific part that spells out one’s obligation. That lack of scrutiny can lead to trouble.

So, let’s take a thorough look at the parts of a surety bond form to have a better grasp of what they really mean.

Parts of a Surety Bond Form

Here’s what’s good about surety bond forms: they have the same format. There may be some forms that have additional sections, but the format remains the same.

There are 3 principal parts to every bond form:

Let’s take a sample surety bond form and dissect it in order to better understand its parts. Please take note that with the exception of the surety bond form, the surety’s name, and address, all the information provided are fictive.

PART 1 OF A SURETY BOND FORM 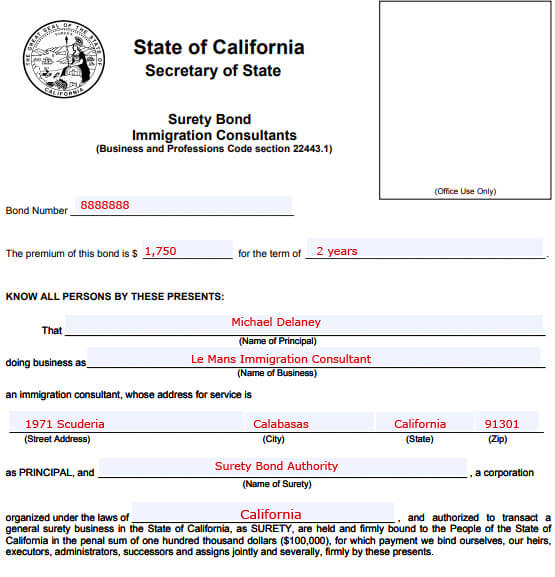 The Surety (Surety Bond Authority) is the one guaranteeing the promise of the Principal (Michael Delaney) to the Obligee (People of the State of California).

The required bond amount ($100,000) is also included in this section as well as the bond premium, bond number, and the bond’s term.

PART 2 OF A SURETY BOND FORM

This part of the form summarizes what the bond guarantees. The specific law that requires the bond and the person or governmental agency in which to file it is identified here.

In this case, the statute is Section 22443.1 of the Business and Professions Code, and the person to whom the bond must be procured is the Secretary of State of the State of California.

The statute will state the dos and don’ts of being an immigration consultant, so a thorough check is a must.

PART 3 OF A SURETY BOND FORM 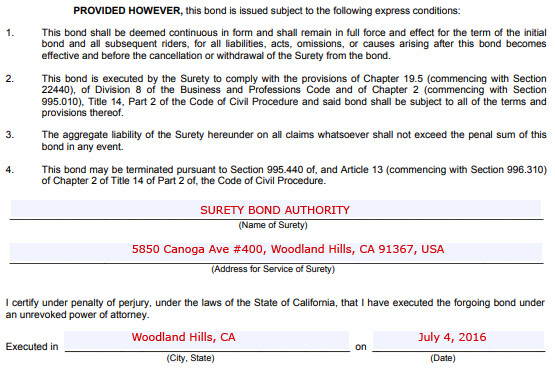 This section details the obligation of the Principal. What Part 3 of the bond form is basically saying is that if the Principal does what he is legally bound to do, then no action will be taken against the bond.

On the other hand, if he fails to perform his obligations, the person or client (Obligee) who has been affected can file for a claim under the terms of the bond.

In our example, the required maximum bond penalty is $100,000. The liability of the surety is only limited to that amount regardless of the number of claims.

Do you need more information about surety bond forms or surety bonds in general? CONTACT US ANYTIME. We’re ready to help you make informed decisions.

Check out this Infographic!

"Anatomy of a Surety Bond"