What is a New York Milk Dealer Bond?

It is a requirement for a milk dealer license. Milk dealers include persons—including corporations and the subsidiary and affiliate of such corporations—who purchase, handles, sell milk or bargain for the purchase or sale of milk. This includes brokers and agents.

The purpose of this surety bond is to ensure that the licensed milk dealer will promptly pay the amounts owed to the following on or before the last day of each month, or on the first 15 days of each month based upon a price or formula as determined by the New York Commissioner of Agriculture and Markets, or the date of payment as established by a federal milk marketing order:

Exemptions to this bond requirement include the following:

How much does a New York Milk Dealer Bond cost?

Bond premiums will depend on the milk dealer’s credit score and the bond amount that will be determined by the New York Commissioner of Agriculture and Markets.

As stated in Section 258-B of the Agriculture and Markets Law of the State of New York, the bond amount shall be 12 times the amount equal to the following:

Once you have determined your bond amount, you can claim your FREE SURETY BOND QUOTE HERE!

How can I get a New York Milk Dealer Bond?

How does a New York Milk Dealer Bond work?

A surety bond is a three-party agreement.

This bond will protect the Obligee against losses if the Principal fails to pay the amount due. If such happens, the Obligee will seek compensation for the losses incurred by filing a claim against the bond. The Surety will pay the Obligee, but the Principal must reimburse the Surety after.

Ready to apply for your surety bond? START HERE! 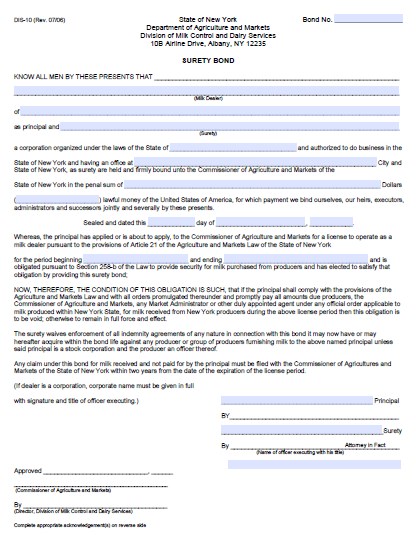